The Society sadly shares that Mr Lewis Edwards has passed away.

Lewis was known world-wide for his Maesgwyn Welsh Mountain Ponies, bred at the farm in Llandefalle near Brecon, but in his time, he also bred some B’s and Cobs.  He was much respected within the Society and was made an Honorary Life Vice President in 2009 for his services to the breed.

Joining the Society in 1958 he was very active within his area supporting both the local Brecon and Borders Welsh Pony and Cob Association, and their flagship National Foal and Yearling show being an active committee member and President in his time.

He bred ponies which were much admired such as Maesgwyn Highlight a Champion at the Three Counties show as a filly whom he sadly lost at such a young age. Her daughter Maesgwyn Highball, however, went on to gain the highest accolade; winning the overall Championship at the Royal Welsh Show in 2010. The judge on the day Mr Gwyndaf Edwards ‘Fronbach’ noted in his report “As soon as they entered the ring Maesgwyn Highball caught my eye, she was full of presence and grandeur and typified what I was looking for”

Lewis himself judged at many major shows including the Royal Welsh Show where he placed Eppynt Victoria and Revel Paul Jones as his Champions.

In 2019 he was awarded the Society’s highest honour – the Brodrick Memorial Trophy, given in recognition of distinguished services to the Society.

Lewis Edwards was a gentle, unassuming person whose ponies spoke for him and his love for the breed.

He will be sadly missed, and the Society’s sincere sympathies are extended to his family, loved ones and friends 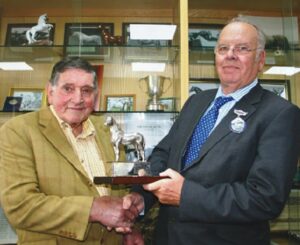 Photograph:Mr Lewis Edwards is presented with the Brodrick Trophy in 2019 by WPCS President Mr Brian Foster,