Overall Supreme of Show was Section D stallion, Gwynfaes Seren Wledig, having won the class for stallions residing in north Wales.  The flashy bay is by Gwynfaes Culhwch and out of Gwynfaes Elliw, and is a full brother to the winner of the class for stallions stabled ‘outside Wales’, Gwynfaes Cyleddon Wledig.  He was shown in the capable hands of Dorian Lloyd of the Perthog stud, who produces him for his breeder owners, Meirion and Dianne Evans. 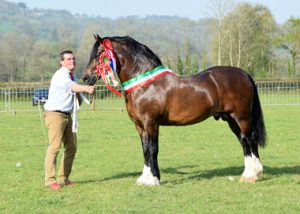 As ever, the stallion classes were well supported, giving judge Kevin Hopkins ample quality to choose from and a spectacle for onlookers.  The award for the best stallion stabled in South Wales went to Mickey Morris’ Thorneyside The High Flyer, handled by Jake Thomas, whilst the class for stallions stabled in mid Wales was won by the Fronarth Stud’s Fronarth Magic Man. 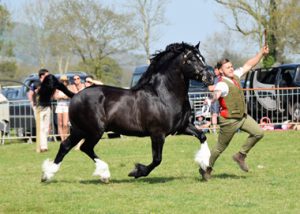 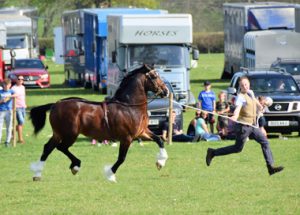 The youngstock Section D champion and overall youngstock championship also fell to Dorian Lloyd’s hands, this time with Rod Lewis’ stunning bay colt, Sianwood Altior.  By Llanarth Prince of Wales and out of Sydenham Oxslip, he was bought by Rod at just ten days old.  He also lifted the Emma Williams Memorial  trophy, given in memory of Emma, who was an avid supported of the show, a much respected breeder, and a true enthusiast of the breed. 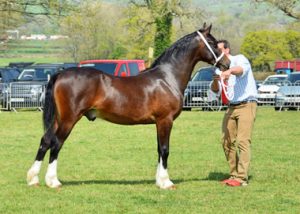 Supreme female champion and reserve champion youngstock in the Section Ds went to the winner of the yearling filly class, Lee Kirkland’s Shearwater Eirlys.  She was shown by producer Scott Gibbons, who was thrilled with her performance given the extremely early start and long journey from Yorkshire to Lampeter.  By Tymor Top Gun, the pretty bay filly is out of Crugybar Morganna Mai. 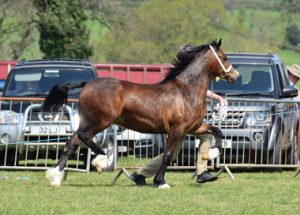 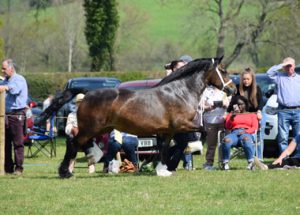 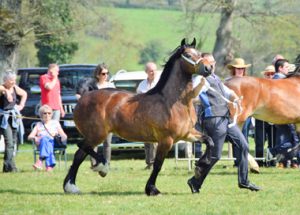 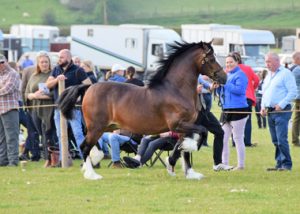 Champion Section A went to the winner of the stallion class, Crumpwell Blue Painter, shown by Connor Kelly.  ‘Painter’ was first sold by the Crumpwell Stud as a foal, but was later bought by owner, Dave Kelly as a two year old.  The six year old is lightly shown, with Lampeter being his first ‘major show’, explained Dave’s daughter, Nicole Kelly.   Out of Crumpwell Blue Velvet, ‘Painter’ is by prolific stock getter, Tafarnaubach Sion. 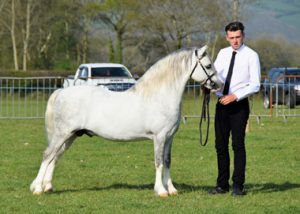 Reserve Section A went to the Youngstock Champion and ‘best colt’, Betws Onid. By Garnelog Arwr and out of Betws Awyr, the three year old was bought by owner Sue Kernan for her daughter, Aimee’s 18th birthday.  Though usually shown by Aimee, he was shown at Lampeter by Tom Clarke, who drove all the way from Hampshire to show him. 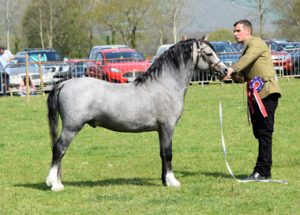 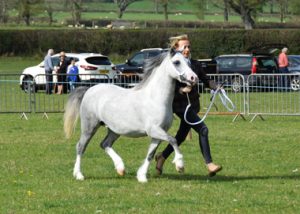 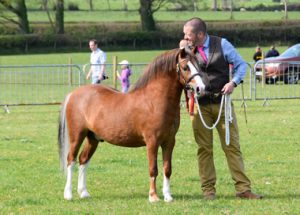 Friars Tears of a Prince 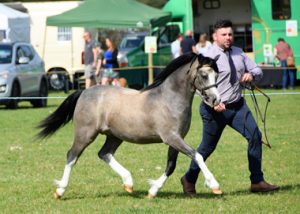 Three year old filly Heniarth Arietta delighted both breeders Meirion Davies and Richard Miller of Heniarth Stud and Aussie co-owner Wendy Trimble of the Tooravale Stud by standing both youngstock champion and overall Section B champion.  Unable to attend, Wendy watched the stunning filly’s triumph ‘live’ via Facebook.  Her sire, Heniarth Woodwind was also champion at Lampeter as a yearling, and the filly is the seventh generation to be shown from a line founded by Meirion’s parents John and Glenys Davies of the Rhoson stud. 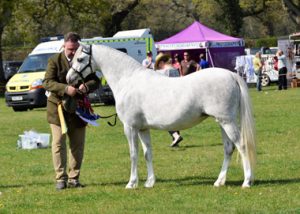 Two year old colt, Heniarth Derring-Do, stood reserve champion Section B for Swedish owners and breeders, Mats and Cecilia Olsson from the Kulltorps Stud.   He is also by Heniarth Wood Wind, and interestingly, the champion and reserve are out of half sisters Rhoson Anoushka and Rhoson Dorti, both by Steehorst Kyro. 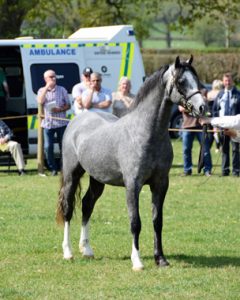 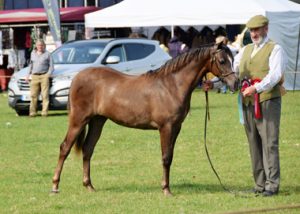 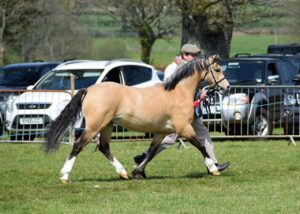 Overall champion in the Section Cs was three year old filly, Fronarth Jade Jones, under judge, Roger Davies of the Hywi Stud. The pretty filly, who stood Section C champion at Royal Welsh Winter Fair as a foal, remains the property of the Fronarth stud and was handled by Dafydd Jones.  She is by Royal Welsh winning Fronarth Robben, and out of Fronarth Charitte. 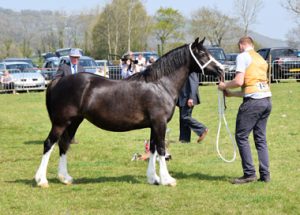 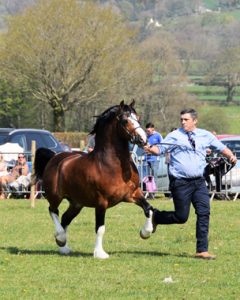 ‘Best Section C colt’ and overall yearling champion went to Rhydeilian X-Pert.  Bred by Tom Hughes,  the flashy chestnut was sold through the Autumn Cob Sales to Tony Lee, having been spotted by Tony’s brother, Joe. 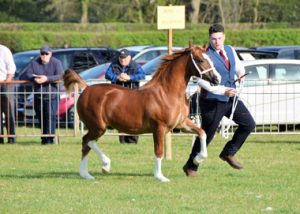 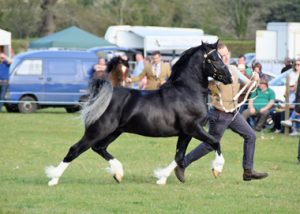 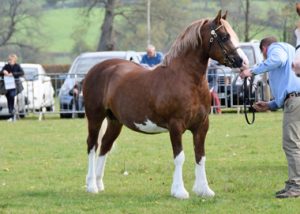 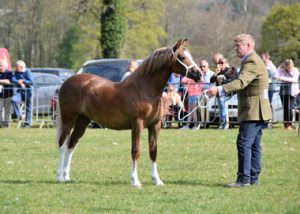 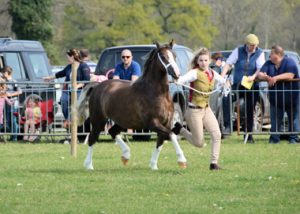 Elizabeth Russell of the Gartconnel Stud made the long trip south from Scotland to judge the driving classes.  Eventual champion was roan stallion, Trixies Brenin Gwalia, driven by his breeder and owner, Steve Watts, having won the class for Sections C or D exhibits.  Reserve went to the second place in this class, Section C, Crossfield Reflection, driven by Declan Davies.  The class for Sections A and B exhibits was won by four year old Section A stallion, Rhesfair Louis Vuitton, owned by Dawn Groom.  He was also shown in his class by Declan Davies, but was ably shown by Katie Nee in the championship. 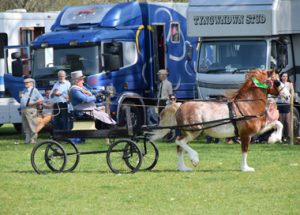 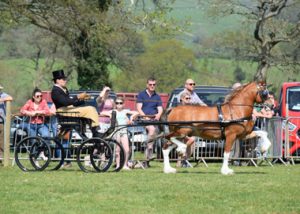 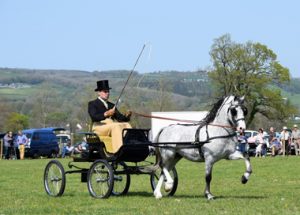 The ridden classes saw excellent numbers forwards in both ridden rings.  The supreme ridden champion was eventually awarded to Danny Everitt’s bay stallion, Monahawk Masterpiece.  Another graduate of the cob sales, the eight year old was bought by Danny through the sales as a four year old.  He is by prolific stock getter Trevallion Picasso, and has enjoyed a very successful ridden career, having previously stood reserve champion at the Royal Welsh.

Taking mini champion was nine year old, Ella Eynon astride Cefngorwydd Sioni.  The pair made their debut off the lead rein a successful one, winning both first ridden classes.  ‘Sioni’ was bought as a yearling at Fayre Oakes by Ella’s parents, Rebecca Faulkner and Eurig Eynon.