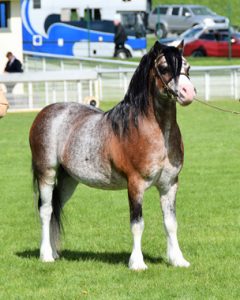 Lifting the accolade for the overall supreme of the show was Eppynt Silver Splash.  The flashy roan stallion first of all won the premium mountain pony stallion class, before taking section champion for the second time consecutively.  Both his parents are former Royal Welsh champions.  His father, Eppynt Skyline, who also stood supreme champion at Glanusk on two occasions, first of all took home the ultimate accolade for the Section A, the Captain T A Howson Memorial trophy for the champion Section A at the Royal Welsh, in 1998, before taking the male championship in 2006.  His mother, Eppynt Silver Locket, also took the female championship that year, and then went one further to take the overall championship. He was described by section judge, Doreen Jones of the Synod stud, as a ‘typey’ example of the breed that you could imagine running on the Welsh hills. He was shown by Kevin Davies of the Eppynt stud, whose great great grandfather, J. L. Davies, was one of the premium scheme’s founders, and first registered Eppynt ponies in 1906.

Taking reserve supreme champion was Meirion and Diane Evans’ Section D stallion, Gwynfaes Seren Wledig.   By Gwynfaes Culhwch and out of Gwynfaes Elliw, the eight year old won the class for novice stallions before once again outshining the competition to stand champion Section D, having already stood supreme champion at Lampeter Stallion show just a few weeks ago.  He was once again capably shown by producer Dorian Lloyd of the Perthog stud, where he will be standing at stud to a limited number of mares.  Reserve Section D was the Brynithon stud’s Brynithon Kensinton, winner of the senior stallion class, who is by Thorneyside The Terminator and out of Brynithon Tianna. 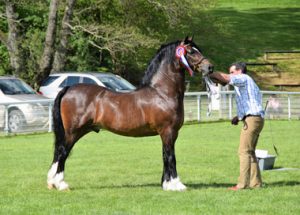 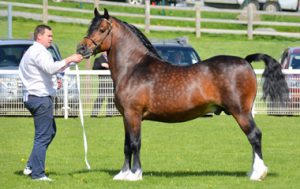 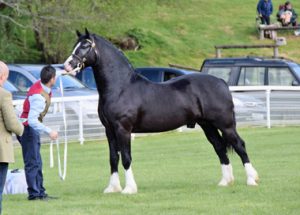 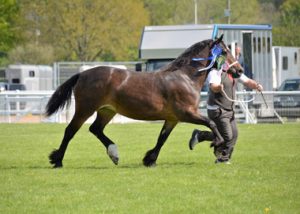 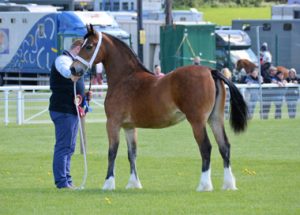 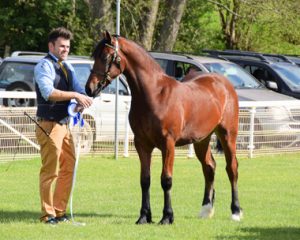 Youngstock Section C champion and overall champion Section C was the Oliver family’s three year old colt, Rhoswen Tenor.  He was shown by David Oliver, who bought his mother, Brynmair Serena, from his cousins through the Llanybydder sales.  She was the last filly to bear the late Charlie Price’s Brynmair prefix, and Tenor was the first foal she bred for the Olivers.  He is also one of David’s first crop of foals by homebred 2014 RWAS supreme and Cuddy finalist, Rhoswen Guardsman.  Like his namesake, David’s cousin, tenor Aled Wyn Davies, the colt is no stranger to the limelight having won the Royal Welsh as a yearling, and stood reserve young stock champion at Glanusk as a two year old before running out with mares at the Abergavenny stud.  He capped the day for the family when he took home the supreme youngstock championship ahead of Section A filly, Dargale Beauty Queen. 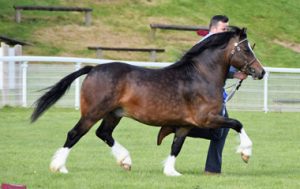 Reserve overall Section C champion went to Dafydd and Sian Morris of the Neuaddparc stud’s Moorcroft Master Tom, shown by Simon Charlesworth.  The stunning black stallion was first spotted by Dafydd he was was judging the Royal Welsh show in 2012.  He fell in love with the then two year old colt when shown under him by breeder Robert Howard’s daughter, Kerry Fuller.  He awarded him youngstock champion and reserve male champion, and subsequently couldn’t resist the opportunity to purchase him.  He has since done all concerned proud, having qualified for the Cuddy supreme in-hand final at HOYS in 2016, taken supreme champion at Lampeter, and won the Brightwells Section C championship at the National Welsh championship show. 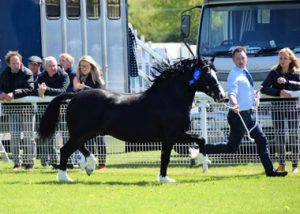 Reserve youngstock and best female in the section Cs was the Fronarth stud’s Fronarth Miss Adlington, shown by Dafydd Jones.  This elegant filly is by Tyreos Aragon and out of Fronarth Miss Pendleton made her first appearance in the ring at Glanusk. 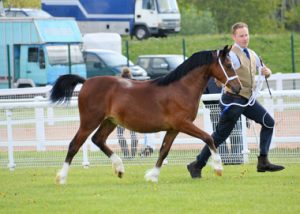 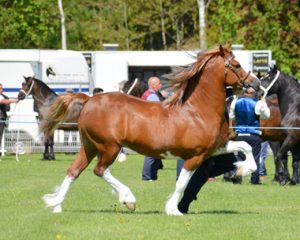 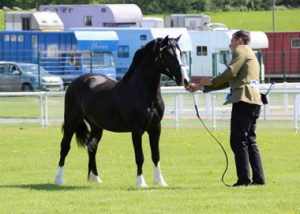 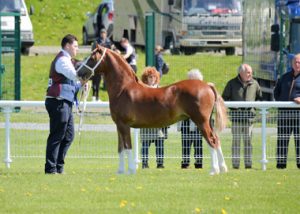 Winning the Section A novice class before taking home the Section A championship was Brynrodyn Derwyn, ably shown by owner, Alun Hughes of the Godebog stud.  The eight year old Cwmhendy Buster son was purchased by Alun at two from his breeder, Gareth Parry of the Brynrodyn stud.  He is very lightly shown, having appeared only twice as a youngster, and this was his first appearance since he stood third at the Royal Welsh as a three year old. Consequently, Alun, was ‘shocked’ to take the championship.  In the meantime, he has been busy with stud duties, and is evidently throwing quality stock, as his daughter, Godebog Rhosyn Mynydd, won the yearling filly class on her debut appearance, before taking the champion Section A yearling prize. 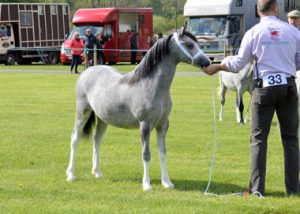 Dargale Beauty Queen took home a cache of trophies for owners and breeders Gail and Darrel Jeffries in the capable hands of producer Adam Fletcher.  She was crowned best Section A filly, younstock Section A champion and reserve overall Section A champion.  The Three B Playboy x Dargale Billy-Jean daughter was shown four times as a yearling, including at Bath and West, Royal Cornwall and Three Counties, and won each time out, taking the medal at South Western Association show.  As a two year old, she won Lampeter a few weeks ago before her Glanusk coup. 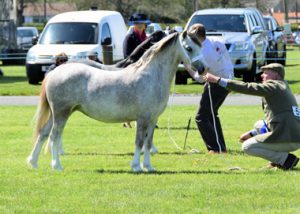 Reserve youngstock champion in the section A’s was Heniarth Sh-Boom.  She was ably handled by Gemma Paxford to lift the three year old filly class, as well as standing reserve champion filly and reserve Section A youngstock champion.  Owned by Ceri Fell of the Brynseion Stud, this charming grey filly is by Blanche Montana and out of HOYS ridden and Cuddy supreme finalist, Heniarth Yippee ah Yeah. 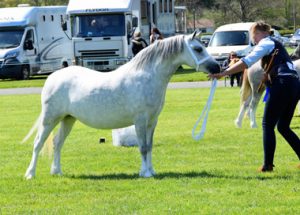 The senior stallion class was won by Kitty Bodily’s Pendock Paige Boy, shown by Justin Davis on his debut as a senior stallion.  Kitty also bred and owns the winning yearling colt, Glebedale Jumanji, also debuting as a yearling.  He was successfully shown last season, standing reserve champion at the Welsh National Foal Show.  He is by HOYS winning and Olympia finalist, Powys Sprite, and out of Pendock Jingle. Glebedale Sancerre, second placed filly is also by Powys Sprite, and stood reserve champion Section A yearling to Godebog Rhosyn Mynydd. 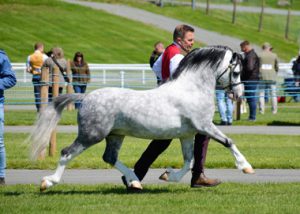 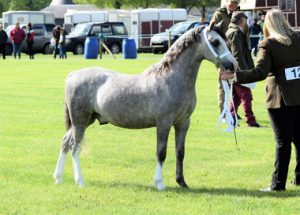 Repeating her recent success at Lampeter, three year old filly, Heniarth Arietta exchanged handler Meirion Davies for Richard Miller, and was crowned Section B youngstock champion and overall section B champion.  She is co-owned by the Heniarth stud and Wendy Trimble of the Tooravale stud in Australia.  The stunning grey filly is a previous Glanusk winner, having won as a yearling.  Her father, Heniarth Woodwind stood reserve champion Section B twice. 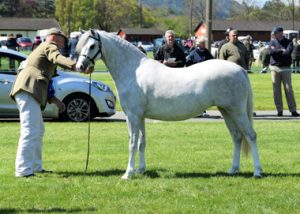 Reserve champion Section B was Matts and Cecilia Olsson’s homebred yearling filly Kulltorps Urbra, produced by Colin Tibbey.  The Mowbray Pilgrim x Kulltorps Kristall filly’s win will have been a tonic for Matts, who’s currently recovering from a farm accident back in Sweden.

Ingrid Delataire’s previous Royal Welsh winner, stunning filly, Tea Time De L’Aurore won the two year old filly class, having arrived from France only two days beforehand.  She was shown by David James of the Sianwood stud. Her mother, Heniarth Thingamajig, is a full sister to the dam of the winning gelding, Heniarth Now You’re Talking, who belongs to the Castlemead Stud. 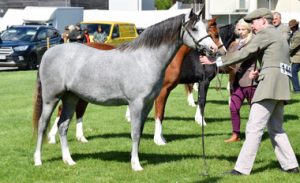 Best colt in the section Bs was awarded to Walseker Colrado, winner of the three year old colt class, who is by Paddock Rio and out of Paddock Petula. Reserve was the Mansfield family’s Cadlanvalley Masterclass, son of HOYS ridden champion, Cadlanvalley Buzby, he was bought by the family at just two days old as a future out cross for their mares at the Janpete stud on account of their admiration for both his sire and his dam, Waxwing Princess Royal.  He has been unbeaten this year and has already secured his bronze medal for the season. 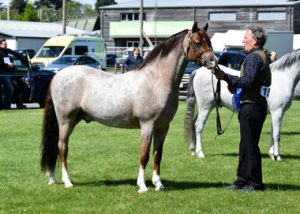 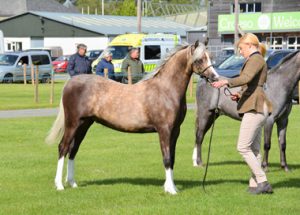 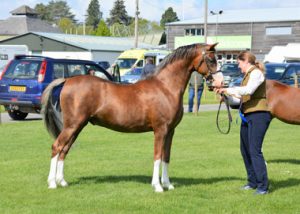 Winning the Section B stallion class was Sandy Anderson’s homebred Thistledown Local Hero, produced by Colin Tibby and his team.   He is by Mintfield Sandpiper and out of Paddock Pleasure, and also won at Lampeter stallion show just a few weeks ago.

It is a testament to the strength of the ridden exhibits forward that three of the four winners are previous HOYS finalists.  Champion Ridden was Dawn Groom’s Parvadean Dakota having won the Section C ridden class.  The flashy bay, who won an impressive HOYS qualifying class last season at the Great Yorkshire show, is now produced by Eleri Marshalsay, but was ridden this time by Cathrin Roberts.  Reserve champion was the Eastwood family’s stunning grey stallion, Nefydd Adferth, ridden by Daisy Eastwood.   Winning the Section A class was the plucky bay roan, Teigyngl Davies-Cooke’s Stormydown Little Tiger.  Winning the Section D ridden class was Emma Davis’ HOYS and Olympia finalist, Haighmoor Llewellyn, cementing the 12 year old’s new partnership with producer, Maggie Simons. 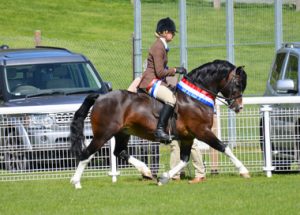 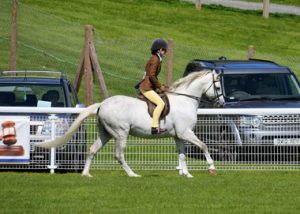 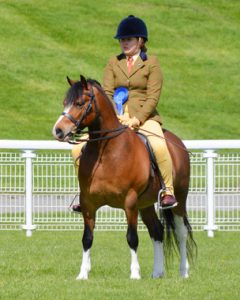 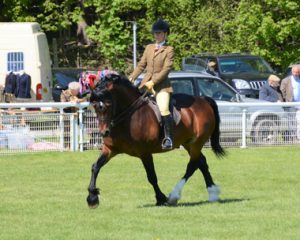