Welsh Ponies and Cobs chequing in!

The Welsh Pony and Cob Society have raised a total of £13,271.85 for Tŷ Hafan, the Welsh Children’s hospice.

At a special presentation day held at Kilvey carriages, one of the children and his family enjoyed a drive around Swansea on a carriage drawn by a four-in-hand. This experience was originally donated to the WPCS auction by Modris Kesans who runs the Carriage Driving centre at Bonymaen near Swansea. At the auction, the experience was purchased by Brian Foster and given on to a Tŷ Hafan family.

Fenton and his family met an example of each of the five Welsh breeds, from the Welsh Mountain Pony through to the larger Welsh Cob and a Welsh part-bred, before alighting the carriage to be driven around the city by Simon Kesans and his four-in-hand.

“Thank you to the Welsh Pony and Cob Society for such a phenomenal and memorable afternoon. It was a once in a lifetime experience for the family that attended and a memory that they will cherish for many years to come.

The funds raised by Society members equate to the basic running costs for one day at Tŷ Hafan. Support like this is vitally important and to top it off Fenton had a great day meeting all the Welsh ponies and Cobs!”

“Fenton’s beaming face on the carriage is the highlight of the Society’s fundraising efforts. Led by a President who is passionate about Tŷ Hafan and the work they do for children and families, it is very satisfying to see first-hand the effect of the Charity’s work. I am particularly proud as well of our Young Ambassador, Catrin Reed – and the Young People’s group of the Society for their support and fundraising.”

The assembled animals and their handlers, driver and rider made for a fitting audience for the presentation of cheques by Brian Foster and Catrin Reed to Tŷ Hafan representatives Shelly Kirkham and Paula Langston.

“Today was one of the best days of my Presidency and a fitting finale to the fundraising which was no mean feat in the year of a Pandemic!” 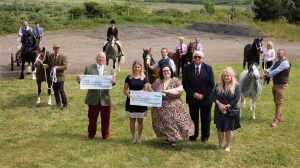 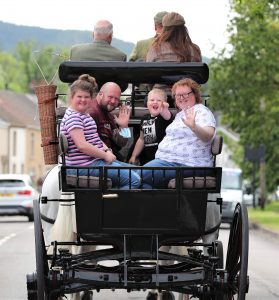