At the recent  Annual General Meeting of the Royal Welsh Agricultural Society held on the Showground, Builth Wells (8th September) Honorary Life Vice Presidency and the Society’s Silver Medal were awarded to Dr Wynne Davies, M.B.E., Ceulan in recognition of his 73 years involvement with the Show.

Dr Wynne first assisted his father with the showing of Dinarth What Ho (section A champion) at the first post-war Royal Welsh Show held at Carmarthen in 1947. Ceulan ponies (sections A, B and C) have been shown at every Royal Welsh Show to date with the exception of 1955 (his father Mr E S Davies was judge), 1971 (when he judged) and 1997 (when his son David judged). Ceulan ponies have won many awards and 1st prizes including winning the section A progeny competition (male and female) 11 times (1972 to 1998). Dinarth What Ho won the Tom and Sprightly cup (then judged by popular applause) in 1952 and Ceulan Calon Lan (owned by Rhydian and Bethan Donati) in 2015 was champion section A, Tom and Sprightly champion Welsh and In-hand Supreme HOYS Cuddy qualifier and Dr Wynne ran him himself (at 83 years) thus beating the record of the previous oldest Welsh pony runner in 111 years. He won the Velvet cup (for under saddle) with Betws Nans in 1962 and 6 first prizes in harness with Dinarth What Ho 1947 – 1953 and 2nd in harness with Sunwillow Irving in 2008..

Dr Wynne reported every Royal Welsh Show (sometimes also taking the photographs) for “Horse and Hound” magazine for 58 years retiring on his 80th birthday in 2012. He was also main-ring commentator for 40 years up to the last Show held in 2019.

Recently Dr Wynne had a Royal Welsh Glamorgan Committee award for having served on the Advisory Committee for 60 years including 8 Feature County events. WPCS Chairman Mr Colin Thomas and Council members also presented him with a “Lifetime Achievement” award. 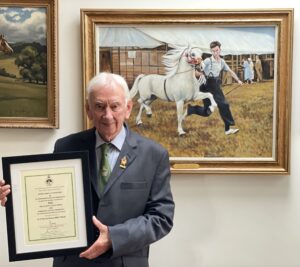