New breeders firm up their foundations, and the established breeders introduce new blood!

With heavy downpours overnight, it was a rain-soaked journey for many to Builth Wells today for the second day of the Welsh Pony and Cob Society’s official sale where McCartneys report 170 animals offered saw 126 sold, with a clearance statistic of 74%.

Today the focus turned to the breeding stock from Welsh Sections A and B and by the time the sale bell rang the sun was shining on an enthusiastic crowd of sale goers.

Prior to the day, the description of the Section A colt foal Cwmhir Croeso bred by Sarah Hamer had piqued the interest of many of the leading studs, and this colt foal did not disappoint, capturing the hearts of many. After a hard-fought battle between established breeders, the hammer fell at £6,400 and he makes his way to the Anglesey based stud of Gareth and Mavis Parry at Brynrodyn; home of the much-admired Cwmhendy Buster, who has dominated the sire ratings for so many years.

Asked to elaborate on Croeso (Welcome) a delighted Gareth was keen to point out that he is not in the habit of buying sale topping animals, but he had been looking for that ‘special’ colt for many years, to go across the Buster daughters. He came to the sale with his trailer, intent that “if he moved true and straight” he would be taking him home. With a triple cross of Betws Dafydd, it will be fascinating to see how ‘Croeso’ works in years to come.

A new breeder establishing her Section A stud today with foundation mares, is Karin Reimondos from Sweden who purchased two females. The top price on the day and breaking the record for a female Section A sold at auction, at £13,000, was the 8 year old palomino mare Springbourne Celebrity – consigned by her breeder Cerys Reynolds from the coveted Belvoir columbine line. Celebrity was joined by the top price filly the buckskin Heniarth Dovetail at £3,400. Karin says that she is  “Looking forward to starting new adventures and making new memories both in the show ring, with breeding and on the farm”. She was also keen to thank Owen Jones, Nebo for bidding and Swedish breeder Per Aschan for his advice and guidance on her purchases.

Section A Mares found a stronger demand than foals this year with Sandy Anderson’s Thistledown Princess Charlotte – in foal to RWAS Winter fair Champion Ilar Dakota making £5,000 to Melanie Alford of Stapelgrove Livestock Limited, again as a foundation mare. She was followed by Mrs Vinnicombe’s, chestnut roan, Uphill Pippi long Stockings. She was the first of several lots carrying Uphill breeding to sell well on the day. This six-year-old mare made £3,500. She was purchased by Mr Finch.

Another of Sandy Anderson’s draft of mares made £3,000 – the six-year-old Thistledown White Heather, daughter of Royal Welsh winning Gartconnel Shooting Star. She makes her way to the Dutch based Turfhorst stud of the Koele’s, who are no strangers to top quality breeding stock.

Also breaking the £3,000 ceiling was the palomino daughter of past Olympia Champion Uphill James Fox, Dolhelfa Golden Charm consigned by her breeder, Newtown based Mrs Hughes. She was sold to the Rothwell-Cure family.

Not to be left behind the Section A males were led by the home bred three-year-old colt Gwyrddparc Haribo bred by Mark and Kathryn Woolley. Selling at £5,000 to Warren Harvey this son of past RWAS ridden Champion A – Ysselvliedts Nushki goes back to Crumpwell, Bengad and Vechtzicht lines, and should have an exciting future under saddle.

Of a slightly different type, the ten-year-old dark bay stallion Ffermymorlais Tempo has an impressive show record at the major shows and has sired champions. He sold at £2,800 to V.Burton.

Top of the foals was the cream filly Popsters Jigglypuff, by the Swedish based Forlan Honey Supreme. Bred jointly by 8-year-old young WPCS member Aston Davis and his mum Heidi, this filly made £2,750 to Ruth Maccinnes. The youngest vendor on the day was delighted with his first ever sale ring experience, his grin widening with every bid!

The trade in the section B’s was less level with only a few hitting the high-spots. The one that everyone wanted was the nine-year-old grey mare, Thistledown Pretty Peggy, of pure Paddock breeding. Sandy Anderson shared “This is a fitting tribute to the vision of the late Bernard Butterworth who passed away this summer and his wife Maureen, both exceptionally talented breeders.” Produced by Liesl Mead, this mare had the added attraction of being in foal to the current Royal Welsh Champion Swedish bred Kallared Heartbeat. A rousing dual with many hands held high saw the final two thrash it out in hundred-pound bids going tit-for-tat. The eventual winner at £8,000 was Melanie Alford who again hopes to establish a new Section B breeding venture alongside the A’s. “I liked her because of her depth and her quality, and we very much look forward to the foal she is carrying”

It is extremely encouraging to see new entrants into the breeding world, and another enthusiast who bought two of the Thistledown draft of Section B mares was Patrick Bukowczan from France. He takes home Thistledown Rainbow at £3,000 and Thistledown Golden Girl at £1,800.

Prior to the sale one of the talking points has been about where an animal is lotted in the draw by the auctioneers. One of the early birds today, the thirteenth lot to grace the sale ring proved that early, middle or late, the buyers will find and be there for quality lots. Mr Butters selling the Anne Holt bred, four-year-old Musbury the Countess for £3,800 to the D’amico’s.

Heading the Section B males was the chestnut yearling colt Moelgarnedd Aran-Benllyn at  £2,000. Consigned by his breeder Aaron Williams and produced by Colin Tibbey, this RWAS winter Fair winner was purchased by Sarah Tattersall.

WPCS President Dennis Price of the locally based Afan stud kindly donated the proceeds from the sale of one of his Section A filly foals – Afan Saving Grace to his chosen charity for his presidential year – “Wales Air Ambulance”. The chestnut filly sold for £900 after spirited bidding ensuring a welcome donation to this worthy cause.J.Preston was the successful purchaser.

Tomorrow’s sale brings forth the Section C’s and D’s – let’s hope that the trend for ebullient bidding is continued to make it a three-day sale success! 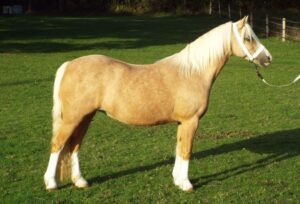 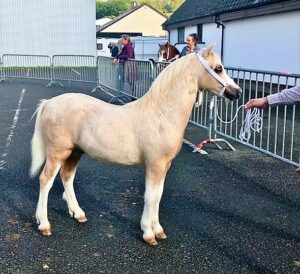 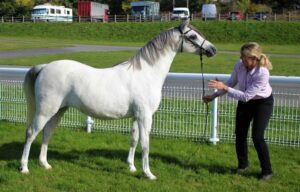 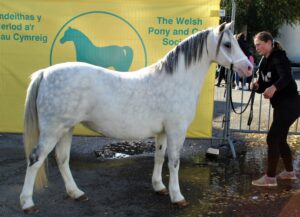 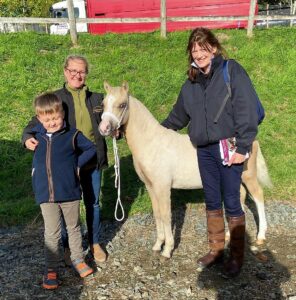 The Annual WPCS and Hill Pony Improvement Societies Feral foal inspection will take place at Brecon Market on Saturday December the 3rd at 10.30am ...