With the passing of Mrs Edwards of the Cascob Stud the Welsh Pony and Cob Society has lost one of its most talented breeders who mastered more than one section with her breeding vision.

Joining the Society in 1958, Mary Edwards bred generations of stock from Foesidoes in Powys. One of her earliest successes was the versatile cream Section C Cascob Cornet by Llanarth Cerdin. He was one of the first winners at the Society’s new concept ‘the Performance awards’ when ridden by her daughters Philippa and Sarah.

But it was the world of the Welsh Cob and the Mountain pony which saw her greatest impact upon the breed. The list of coveted animals is a roll call of greats, such as Cascob Heledd, Cascob Cardi Lady and Cascob Eluned a triumvirate of Royal Welsh winning fillies each emanating from a different foundation line mare, illustrating her breeding skills.

The Welsh Mountain pony saw the two stallions Cascob Silver Ghost and Cascob Red Kite influencing so many studs – an effect which will pervade so many successful pedigrees in the future – combining hardiness, substance, bone and pony character coupled with the kindest of temperaments.

Mary Edwards was a Past President of the Society, a long serving Council Member and a WPCS Panel judge – selecting the dynamic Ebbw Victor as her Royal Welsh Champion in 1998; followed gamely in the muddy main ring that year by the wonderful matron Gwenllan Sali .

Despite reaching these heights within the breed she remained a centred, focused breeder who favoured not fashion but kept interpreting the breed standards and ideals to the best of her abilities with each foaling season.

She once regaled a conversation she had with a well-known breeder who had recently sold one of his Welsh Cobs for a great deal of money. He said that he

As a Society we take solace that the ‘Cascob’ daughters and family will continue to perpetuate her passion.

We extend our sincere sympathy to her family and friends.

The public funeral will be held at Llanbister Church, Llanbister, Llandrindod Wells, Powys, LD1 6TN on Thursday 29th of September at 2.00pm. 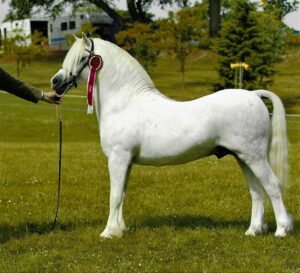 The Society Office will be closed tomorrow as a mark of respect f...
Read Article
9 Sep 2022

WPCS OFFICIAL SALE TICKETS ARE ON SALE FROM MIDDAY TODAY!

The pre-event tickets for the WPCS Official Sale are now available to purchase online. Entry £10 per person, for each day. If you want to stay o...