The Society is saddened to record the passing of one of its most iconic and influential figures, Geraint Jones of the Nebo Stud at the age of 88.  He was one of the most well-known, respected and popular members of our Society.

To say that Welsh Cobs played an important part in Geraint’s life is an understatement.  At the age of 10 he would harrow the fields in Tyngwndwn with the mares Tyngwndwn Beauty and Isfryn Bess.  As a young boy he would accompany his uncle David John Jones of the Fronarth Stud to ploughing matches.

When Geraint and Mary married in 1961, they were given a present by Geraint’s father – Tyngwndwn Mathrafal Lady.  On their marriage the young couple moved to Lluest Hen and formed the Nebo Stud.   Prior to that Geraint used the prefix Tyngwndwn, the farm his parents bought when they returned to Wales from London on the outbreak of war.

The pinnacle for Welsh cob breeders is to breed a George Prince of Wales Cup winner.  Geraint was justifiably proud that his family had bred 4 winners of this prestigious trophy – Tyngwndwn Cream Boy, Nebo Black Magic, Nebo Daniel, and Nebo Hywel.  In addition, Nebo Brenin has sired two POW Cup winners, won the harness class at the RW, and also monopolised the sire ratings winning the Section D ratings 8 times and the Section C ratings 9 times.  Brenin and Bouncer were both awarded the Broderick memorial trophy.

Nebo Daniel and his son Nebo Prince have also topped the sire ratings and Daniel’s grandson Gwynfaes Culhwch has dominated the sire ratings in recent years. Nebo Bouncer was champion at Lampeter Stallion Show 5 times, and won at the RWAS on 7 occasions and carried on his sire Brenin’s dominance of the Section C sire ratings topping it 13 times. Nebo Julie Ann and Nebo Joni Jones have been Champion ridden at the RWAS with Julie Ann also winning at HOYS, thus illustrating the versatility and excellent temperament of the Nebo animals.

Geraint was a character in every sense of the word – he had an infectious personality with everyone feeling at ease in his company.  He enjoyed a good chat and had time for everybody.  He could diffuse the most difficult situation with his quick wit and one liners.  He was a wonderful raconteur and his memory of events of long ago were clear to the end. It was a pleasure to visit Lluest Hen where a warm welcome was afforded to all with Geraint and Mary.

Geraint joined the Society in 1957 and served as a council member for over 30 years.  Such was his popularity that when he first contested the trustee election he topped the poll with the then record number of votes.  He was made President of the Society in 1993 and has also been awarded the Fellowship of the Royal Agricultural Societies.

His services as a judge were in much demand and he travelled all over the world in this capacity.  He judged the Royal Welsh 5 times and declined invitations on another two occasions.

Geraint was especially proud of the achievements of his children Owen and Lisa and grandchildren Catrin and Lowri.  The Society extends sympathy to Mary and the family.

To celebrate the wonderful life of Geraint, Nebo

Donations in memory of Geraint, if desired to Tanyfron Surgery or the Ty Geraint Palliative Care Fund to express the family’s heartfelt thanks for the care and love shown towards Geraint over recent months and will be gratefully received by
Huw Reed, Tyngwndwn, Cross Inn, Llanon, Ceredigion, SY23 5NG. 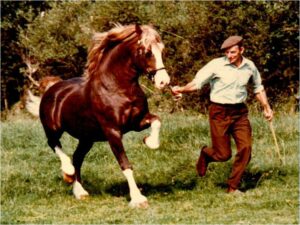