The showing world lost one of its most famous sons when Len Bigley quietly passed away in hospital on the morning of 22nd December 2020 following a long and hard struggle against illness. It is typical of this quiet, unassuming man that throughout he never complained and fought a good fight all the time with dignity his family by his side.

From an early interest in ponies he first helped his Shropshire neighbour, Mrs Borthwick, with her Trefesgob Welsh Section Bs while still at school before going to work at the Llanarth Stud of Welsh Cobs in 1964 where he remained until his move to Quakers Farm, Herefordshire, following his marriage to Ann. It was under the experienced eye of his employer, mentor and friend, Miss Pauline Taylor, that he embarked on a career in the show ring which saw him ride and drive the Llanarth cobs during those early days although it was his skill as a showman in hand that brought him to notice of the nation. It is often said that it was Miss Taylor who took the cobs out of Wales however she would be the first to have said that it was her showman, Len, who made the rest of Britain sit up and notice.

Len was the consummate showman with a natural empathy for his ponies and cobs which was evident in the masterful performances they consistently produced in the show ring. He could elicit the more reserved and sedate performance out of his riding ponies in equal measure to the explosive and electric displays from his cobs. It is no wonder that he produced in his time almost fifty qualifiers for the In-Hand Finals at the Horse of the Year Show, surely a record that is unlikely ever to be beaten. As a producer and breeder, Len, has taken every major championship in Britain including the overall title at the Horse of the Year Show in 1979 and 1980 with Llanarth Flying Comet and in 1998 with Merriment Pussycat. It is little wonder that his children, Simon and Catryn, have learned a great deal from him and it is with great pride that he and Ann have seen them follow in his footsteps. He has been a role model for other aspiring show men and women.

A quiet, modest man with impeccable manners, Len was always recognised by his warm smile. He let his results do the talking and was never one to brag about his achievements. He was a loving family man who enjoyed the success of his children and was delighted to witness his grandchildren, Evie and Millie, take up an interest in ponies. He was devoted to his wife Ann who has been a great strength throughout their time together, the proverbial ‘great woman behind every great man’, who was with him to the very end. It is to Ann, Simon, Catryn and their families that the equestrian world sends its deepest sympathy. 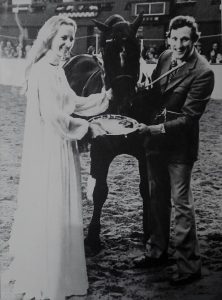