With the sad news earlier in the week that Mr Gwyn Berry of the Betws Stud had passed away, the Society has lost another talented breeder, judge and friend.

Gwyn joined the Society in 1959 and was an eminent breeder of both Welsh Mountain Ponies and Welsh Section C’s. A member of the panel of judges for many years, he officiated at most major shows at home and abroad. He judged the Royal Welsh Show in 1981 when his Male Champion was Glenfield Chocolate Soldier and his female Champion Bengad Day Lily with the mare taking overall honours.

One of the highlights of his breeding career was taking the Supreme Welsh Mountain Pony award at the Royal Welsh Show in 1999 with his homebred Betws Gweno under judge Miss Rosie Russell Allen. More recently a young colt he bred Betws Onid qualified for the Cuddy final at the Horse of the Year Show.

Mountain ponies were his passion and the breed saw the likes of Betws Emrys, Dafydd, Anwyled, Fflach, Proffwyd, Mari Ddu and Eiddwen grace the ring with great success. A young colt which carried six generations of Betws blood – Betws Lloyd George made the long journey to Australia.

Gwyn had a very good sense of humour and had a wealth of friends within the Society and beyond – his character will be missed by so many.

This is a brief message from the family.

We want to thank you all for your kind messages of condolence. It comes as a great comfort that people have so many great memories of him, and that he was loved by so many.”

His funeral will take place at the Colwyn Bay crematorium on Thursday the 3rd of February at 3.30pm and the hope is that for those who cannot attend. the service will be webcast.

A young Gwyn Berry with Betws Hufen later exported to the USA. 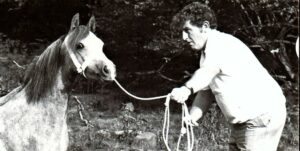 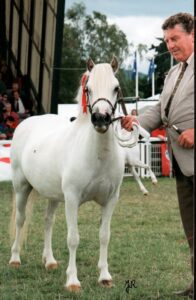 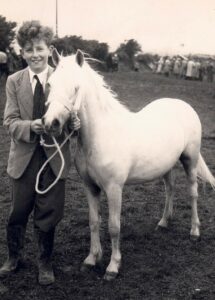