The Society was saddened to hear the news that Bill Pounder of the Putwell Stud had peacefully passed away at the age of 91 years.
Bill was a life member of the WPCS having joined in 1971. He registered the Putwell prefix named after a farm close to his then home in Cilfynydd, Pontypridd.
Bill was passionate about Welsh Mountain Ponies but had a special interest in the Hill Ponies and could always be seen between the Premium Ring and the Section A ring at Glanusk Welsh Stallion Show keeping an eye on both sets of classes. His knowledge of the breed pedigrees was second to none and he delighted in spending hours in the company of others who shared his enthusiasm talking about ponies.
His greatest achievement was breeding the renowned stallion, Putwell Carreg Llwyd who won the Royal Welsh Junior Stallion class under the Late Lewis Edwards, Maesgwyn, in addition to multiple WPCS medals and championships. This pony was his ultimate pride and joy.
He was always a devotee of the Welsh Mountain pony as well as recognising all sections from within the breed. His passion for all things Welsh lasted a great many years, along with his delight in pedigrees and the information they provide a breeder. It gave him great pleasure that as a breeder he successfully passed on his enthusiasm to his daughter Barbara Green and grandson Dan May to carry on his mantle, ensuring that the Society will benefit from their support in the next generations.
The family were delighted to see him accept his Honorary Life Membership at the 2022 AGM and attend one of his most favourite shows held by the Dowlais Mountain Pony Improvement Society as their President in June 2022.
Thank you Bill for your love for the breed.
Funeral Arrangements
A service will be held at Glyntaff Crematorium, Pontypridd on Wednesday, 7th September at 2.15pm and afterwards at Pontypridd Rugby Club to enjoy some refreshments and share memories of Bill.
Family flowers only. Donations, if wished, can be made to Diabetes UK.
The family are happy if you wish to wear a splash of colour to celebrate his long and happy life. 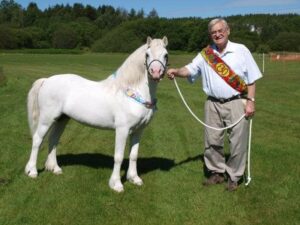 Photograph: Bill Pounder and Putwell Carreg Llwyd celebrating their respective birthdays at 80 and 21.