Whilst the bureaucrats are busy thrashing out Brexit; buyers of Welsh Ponies, Cobs and Partbreds were busy closing deals on the Society’s fifth and final Official Online auction for 2020.

Trade was patchy with several of those entered falling just short of their reserves. However, one trend which became apparent was that almost all of those lots sold will leave the shores of the UK.

Topping the sale at £3,300 was the impressive three-year-old Section D colt Parciau Bonheddwr homebred by Mrs Williams. His ticket will take him from North Wales to the island of Guernsey. Close on his heels from the Cobs selling at £2,600 to Germany was the grand chestnut mare Cascob Mary Berry carrying a foal by the Prince of Wales Cup winner young Cascob Brenin Dafydd.

France will be the destination for Mandy Jones’ Melau Rori the palomino Section B yearling colt selling at £1350 from Waxwing, Boston and Anri bloodlines.

In the Section A’s Linda and John Harries  of the Hope stud have supported every online sale with entries; on this occasion selling both their colt foals by past High Flyer purchase Rookery Stardust; Hope Scout and  Hope Starman to Sweden and the Netherlands respectively.

But after an exciting tussle with the bids bouncing back and forth with less than thirty seconds to go; top of the Section C’s was John and Jacky Kirk’s Donys Persuader at £1,950. He stays in Wales joining the Glyncoch stud where no doubt he will charm the C mares like his namesakes from the hit 1970’s TV series – Roger Moore and Tony Curtis!

The Society would like to thank the team at Farmer’s marts for enabling these sales and offering members the opportunity to sell their stock online in these difficult times.

If you missed out on a purchase some lots will be available on the ‘buy it now’ platform for ten days after the sale. Go to www.farmersmarts.com to see the listings. 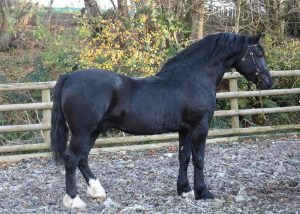